Our independent ALDI Natural Elements dog food review will tell you the good… and the bad… about this food. So, read on!

The main ingredient in Natural Elements “Chicken” is actually Poultry Meal, so it’s a bit dubious how much chicken there actually is. Ambiguous ingredients are often poor quality (which is a cert given the price per kilo of this food), and this could be a combination of whatever “poultry” is cheapest. It definitely won’t be the succulent chicken breast pictured on the bag, but remnants of poultry inclusive of frames and whatever can’t be sold for human consumption. This is the case with most pet foods by the way.

So there you go, an insight into ALDI Natural Elements dog food. The review probably reads more negative than positive, but it’s still a better food than the likes of Julius and far too many other supermarket dog foods. If you have a tight budget then this could be a suitable option, in which case it’s worth supplementing with fresh meats and veggies to really offer your dog a boost on a budget.

Rated 6 out of 10 as ALDI Natural Elements dog food is a reasonable budget option. If you want a better dog food then be sure to check out our Best Rated Dog Foods list 👍

Where to buy ALDI Natural Elements

Unfortunately ALDI Australia don’t have a delivery service, but you can use their tool to find your nearest store.

The ingredients of ALDI Natural Elements dry dog food (as of March 2021) is as follows:

The guaranteed analysis of ALDI Natural Elements dry dog food (as of March 2021) is as follows:

Would you be able to do a review on Aldis natural elements chicken and rice?

Hi Paul, I’ll see if I can track down the ingredients… unfortunately they don’t list them online, and I don’t live near an ALDI :/

How would this compare to the natural elements grain free chicken you reviewed?

Why has Aldi ceased to supply 2.5 kg Natural Elements dog food with 60 % protein

Hi.
do you know who is making the Adli’s brand, Natural Elements?

I assume this product isn’t available in other countries. It doesn’t seem to be.

Hi,
I bought Aldi’s “Natural Elements” wet food & it has really good healthy ingredient & the quality is very good, it comes in a white plastic tray, sealed with foil, when you open you can smell a nice fresh smell, normally dog wet can food does NOT smell that great but this Natural Element wet food does, you have the Shredded Chicken on 1 side you have the Duck or if you buy the Beef on the other side & undernealth you have all the proper veggies, my cat went nuts & wanted some of Patch Lunch, so I gave Indy some she loved it & its only 99c I saw a lady yesterday in Coles buying a heap of the small My Dog foil wet foods they were on special 5 for $5.50, I told her go to Aldi’s, Adli’s have a new range of Dry, Wet & Treats better quality dog food & smells heaps better then the Coles & Woolworths wet foods.. 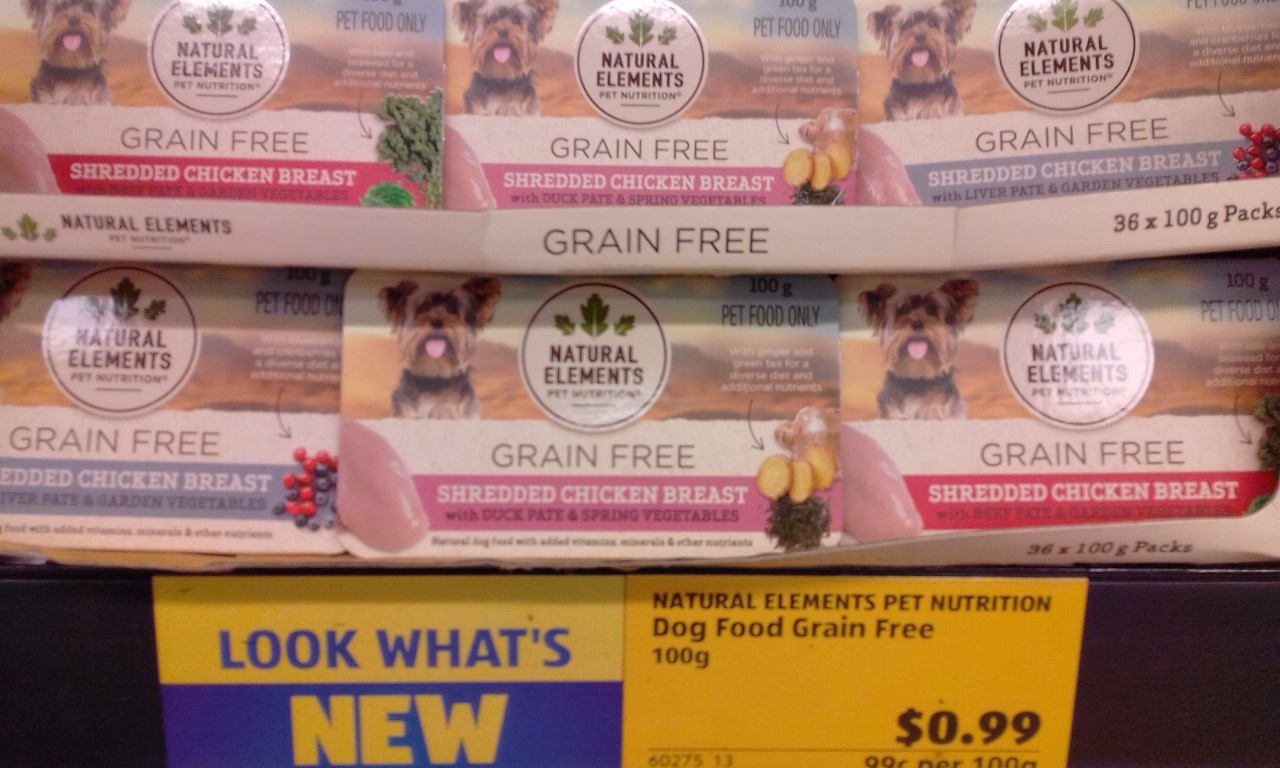 * The Adli “Natural Element” Treats are also good quality, I cut the sticks up into small pieces & put in a small container my cat loves them aswell & you know how fussy cats can be..
The Kangaroo Treat Sticks have red meat in the middle when I was cutting the sticks up 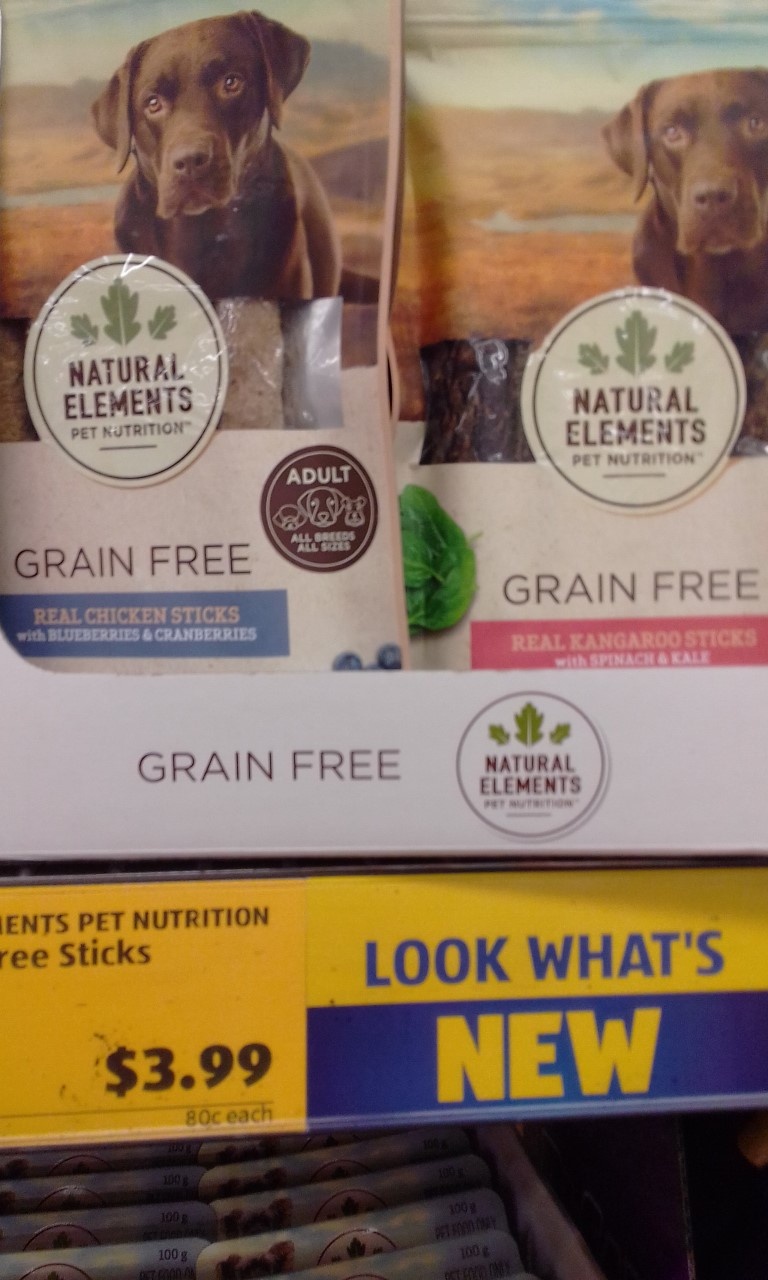 This website uses cookies to improve your experience while you navigate through the website. Out of these, the cookies that are categorized as necessary are stored on your browser as they are essential for the working of basic functionalities of the website. We also use third-party cookies that help us analyze and understand how you use this website. These cookies will be stored in your browser only with your consent. You also have the option to opt-out of these cookies. But opting out of some of these cookies may affect your browsing experience.
Necessary Always Enabled
Necessary cookies are absolutely essential for the website to function properly. These cookies ensure basic functionalities and security features of the website, anonymously.
Functional
Functional cookies help to perform certain functionalities like sharing the content of the website on social media platforms, collect feedbacks, and other third-party features.
Performance
Performance cookies are used to understand and analyze the key performance indexes of the website which helps in delivering a better user experience for the visitors.
Analytics
Analytical cookies are used to understand how visitors interact with the website. These cookies help provide information on metrics the number of visitors, bounce rate, traffic source, etc.
Advertisement
Advertisement cookies are used to provide visitors with relevant ads and marketing campaigns. These cookies track visitors across websites and collect information to provide customized ads.
Others
Other uncategorized cookies are those that are being analyzed and have not been classified into a category as yet.
SAVE & ACCEPT
wpDiscuz
7
0
Would love your thoughts, please comment.x
()
x
| Reply