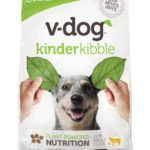 I aim not to be biased when reviewing pet foods, but from a nutritionist perspective dogs are essentially carnivores and shouldn’t be fed a vegan diet. It’s possible for a dog to live a healthy life on a vegan diet but it should be considered a dog is under your care and is it right to force a carnivorous animal to adhere to your dietary beliefs? Probably not.

V-Dog is one of the better vegan dry foods available. It’s made in California and sold by specialist retailers in Australia.

The main ingredients are peas and pea protein (so essentially lots of peas). These are a source of protein and fibre and one of the best vegetable ingredients used in pet food. Pea proteins aren’t as bio-available as meat proteins when you consider a dog’s shorter digestive tract, and feeding peas in excess can prove problematic. They’re otherwise a decent ingredient. We often see peas alongside meat as a cheap way to bulk up protein, and with this being a vegan food we just have the peas. We’d expect that to be reflected in the price, but this food is actually more per kilo than most meat-based kibbles. We also find potato protein as a further source of protein, which again isn’t as digestible for dogs as meat proteins.

Next we have a combination of brown rice and oatmeal. These are decent grain inclusions, and it’s great to see oatmeal as a solid source of slow burning energy. A bit further down the ingredients we find the cheaper starchy grain sorghum.

Canola oil isn’t the best choice of oil, but being a vegan food they can’t use anything like fish oil as a better source of omega fats. Other ingredients offer much needed omega 3 and 6, including flaxseed and sunflower chips. Other ingredients really highlight this as a vegan food – lentils, quinoa, alfalfa – each with nutritional merit and extra protein.

There are no added probiotics to aid digestion, and none of the minerals are chelated so will be harder to absorb. Price wise it’s very expensive per kilo if you consider there’s no meat content. It’s also very low in fat, and dogs utilise fat (animal fat) for energy.

Overall for a vegan food it’s better than others we’ve reviewed. Dare I say it, but if you add raw meat to this you’ll be offering your dog a decent diet.

Good choice of ingredients for a vegan food.

* Carbohydrates aren’t listed on pet food labels. This value is calculated based on levels of protein, fat, moisture, and ash. Estimated values for moisture and ash have been used where these values haven’t been given (moisture of 10%, and ash of 8%).

Related Articles
Search for a review