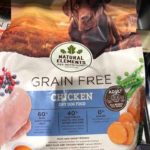 Let’s take a look at the Grain Free Chicken recipe…

The main ingredient is Poultry Meal. They say it’s a source of chicken, but how much chicken we don’t know.  Ambiguous ingredients are often poor quality (which is a cert given the price per kilo of this food), and this could be a combination of whatever “poultry” is cheapest. It definitely won’t be the succulent chicken breast pictured on the bag, but remnants of poultry inclusive of frames and whatever can’t be sold for human consumption. This is the case with most pet foods by the way.

So there you go, an insight into ALDI Natural Elements. The review probably reads more negative than positive, but it’s still a better food than the likes of Julius. If you have a tight budget then this could be a suitable option, and it’s worth supplementing with fresh meats and veggies (which are often reduced at the local supermarkets).

* Carbohydrates are listed on this product as maximum 15%.

Added to wishlistRemoved from wishlist 4

Added to wishlistRemoved from wishlist 26

Added to wishlistRemoved from wishlist 8

$72.36
Buy from Pet Circle
Use our price compare tool
Newsletter
Follow Us
Disclaimer